Proudly serving the La Crosse area from our Onalaska office!

With a total area population of about 150,000 (55,000 in La Crosse proper), La Crosse, WI., is a mid-size city that offers big-city education, services and entertainment along with an exceptional community spirit and values that are more typically found in small towns.

The University of Wisconsin–La Crosse also has a strong arts program and produces many musical, dance and theatrical performances each season.

Across the street from the Weber Center for Performing Arts at the Pump House Regional Arts Center and also within the Viterbo Fine Arts Center, you’ll find a variety of visual art exhibits, including paintings, drawings, sculptures, weavings and photography.

If you’re in the mood for Hollywood, La Crosse has three area cinemas, including the retro-style Rivoli that guests must experience to appreciate. For little ones, the Children’s Museum of La Crosse offers three floors of fun ways to learn.

La Crosse also offers a lot of local musical talent, with everything from big-band and jazz ensembles to acoustic soloists and rock groups performing regularly in venues throughout the city.

Additionally, on almost any given weekend, you’ll find a festival in the region. Each year Freedom Fest comes to Veterans Memorial Field on the University of Wisconsin–La Crosse Campus, bringing with it A-list performers and fireworks. But La Crosse is probably best known for its Oktoberfest celebration that draws thousands of visitors to the city at the end of September every year.

With the Mississippi River, the Black River and La Crosse River — not to mention area lakes such as Lake Onalaska and Neshonoc Lake — there’s never a shortage of outdoor recreation options. Whether you want to canoe, kayak, water ski, jet ski, fly fish or ice fish, you’ll find plenty of water activities in La Crosse.

If you prefer something more man-made, La Crosse also has several parks and municipal pools, and aquatic centers are found in two neighboring communities. 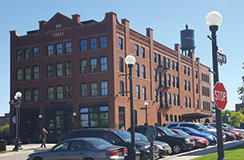